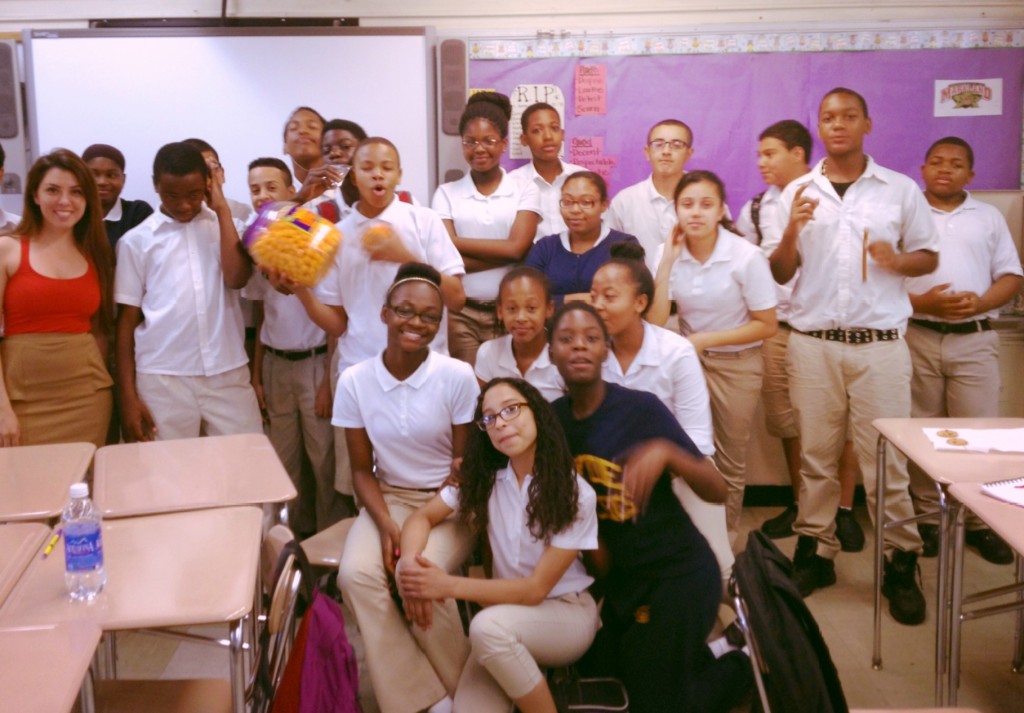 On average, the English Department graduates between 300 and 400 majors every year. In 2012-13, the specific number was 375, or five percent of the entire class, as Professor Scott Saul noted in a recent op-ed for The New York Times. These graduates go on to a variety of surprising and exciting careers. In this new series, Alumni Stories, we ask alumni of the English major to talk to us about where English has taken them.

Second in the series is an interview with Sylvia Gonzales about her work as a teacher. After Sylvia graduated with a degree in English from Berkeley in 2007, she attended Harvard, where she completed a master’s degree in education in 2010. She currently teaches 7th-grade English at a middle school in the South Bronx, where she has been working for three years.

1) There are a lot of tracks one can take out of an English major—writing and editing come to mind as obvious choices, of course, but also teaching, which is what you decided to do. Can you talk briefly about your journey to becoming a teacher? When did you decide that was what you wanted to do?

On most weekends as a child, I would cross into one country while leaving another. I was born in south San Diego, but was raised crossing the border into Tijuana, Mexico: becoming the daughter of both countries like so many families in south San Diego, who fluidly commute and exist between the two. As I grew older I realized there were deeper borders within San Diego that did not divide with fences or barbed wires; these borders were much more elusive. My mother was a nanny for many years to wealthy families in northern San Diego, one of which was generous in allowing my family to use their address to attend northern San Diego schools, an area that is—demographically and socio-economically—the polar opposite of the border community I grew up in. For seven years I made the nearly two-hour commute with my mother to attend these privileged schools. After school I would work with my mother to clean, babysit, and cook. This experience became particularly painful when I began working alongside my mother in a home that belonged to a classmate. The feeling of “otherness” became glaringly clear to me. I began to feel that I existed in two separate worlds: the one in which I lived and the other in which I was a visitor: a worker. Although I did not have the language to articulate the disparities I saw, I felt a piercing difference that I was unable to articulate.

However, my visceral reaction to a feeling of “otherness” I felt as a child fundamentally shaped my desire to become an urban educator. I felt I had uncovered a disparity, an acute gap between these two communities when in reality it had existed long before my arrival. I felt a need to return to a community similar to the one from which I came, and to heal the sense of “otherness” I remember feeling and was yet not able to articulate. As an urban educator, I believe teaching is a cathartic process where I am able to heavily reflect on the dynamics of immigration, race, class, and language and how each has provided a framework for my own narrative. I purposefully teach in the South Bronx because I feel compelled to teach in a community where I feel both native and alien, where I would be able to see reflections of myself in students and their families and simultaneously learn from an urban context that was not my own.

2.) Tell me about your experience as an English major. Is it something you’re glad you did? How has it helped you, and how has it held you back (if at all), as a teacher?

As an English major at Berkeley, I was particularly drawn to African-American literature for a variety of reasons, but most importantly because of the subversive nature of the slave narrative. I personally relate to the sense of a binary existence: one that I feel very much as an urban educator. Having grown up in a cultural ghetto myself, but having gone to school in an area that was socio-economically the polar opposite of my own community, I felt split in two: fluidly navigating in two worlds that never seemed to touch. I understood the subversive and political wherewithal in African-American literature to be inspiring. I have drawn from this spirit of subversion in my daily work as an urban educator in a de facto segregated school; it is in the classroom where I am most cognizant of my privilege, as a Berkeley and Harvard alum, but I am also equally cognizant that with my mother, I would clean homes, carry and care for children that were not my own. I still struggle with reconciling these two aspects of my life. There are times when I have difficulty balancing how being the “nanny’s daughter” has been my greatest source of strength and also, at times, a source of shame. Through the lens of a first generation Mexican-American, I am able to draw many parallels from African-American texts, in particular the struggle for identity, culture and language and how each of these intersections have framed so much of who I am and where I come from. It was through the study of these texts that I realized my work in the classroom was political, subversive, good work.

3) I’d like to hear more about how you teach. What do you value most as an educator? What do you think your students find most valuable? I would appreciate general thoughts pertaining to those questions, but also observations specific to your workplace in the South Bronx. How do you get students at your school interested in literature?

Teaching, especially in an urban context, has been and always will be a deeply cathartic process. I constantly see reflections of myself in my students and I am confronted with the struggles I faced as a student. I enjoyed reading as a student mainly because my mother was consistent in reading the Bible to us as children, which fed my appetite for narratives, and in particular an affinity for stories of struggle and hardship. So, when thinking about what texts to select for my students, I start there. Logically, even as adults, we read what we are interested in. So, I approach students the same way. My points of entry, especially with reluctant readers, are for reading to be viewed as interesting yet challenging: something that blows their minds, that is scandalous, dangerous, beautiful, and that has the potential to connect to their lives.

It is difficult to articulate many of the things I value as an educator, but in my short career (three years in the classroom) I have come to deeply value deference among teachers and students: character-building that is taught alongside content, meaningful organic relationships with students, and a sense of urgency and grit that is inherent in learning something challenging. Because I grew up in a community very similar to the South Bronx, I have an understanding of what, as a community, is collectively valued; education is a gatekeeper to what so many immigrant families have come to New York City to accomplish—a better life, a chance to succeed. It is the reason why our parents have traveled so far and worked so hard.

Tags:Where Can English Take Me?